about this afternoon session 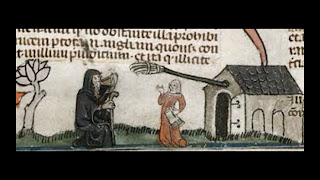 During the previous 'Witches, Cauldrons & Ale' episode I explored the ancient origins of the 'alehouse wives' recorded on scribed stones in Mesopotamia some time between 7000 BC and 10,000 BC.

From there I explored the spread and journeys of the 'alehouse wives' traditions westwards, skirting the Roman Empire, to be revered as 'goddesses' by Viking and Norse tribes, and then their landing on Briton lands and eventually onto our Ireland of Eriu.

I also teased how the 'alehouse wives' culture became transformed into the images of 'witchery' and introduced the origins of some of the familiar symbols of 'witchery'.

During this second part of Witches, Cauldrons & Ale, I explore the rise of the 'alehouse wives' from their still humble ale brewing shelters and retreats beside sacred spring wells during Early Medieval years. I explore how 'alehouse wives' escaped the grips of slavery and slowly accumulated wealth and power through 1000 years of Medieval legacy.
I explore how their humble shelters became more secure ale houses with space and seating. Then grew to become inns for passers by. I will delve into their growing family lives and how their children entered and developed the traditions. This includes how men became powerful brewers.

The dark days of late Medieval and into the growth of Christian Puritan ways is also covered. This includes the early branding and propaganda of accusing 'alehouse wives' of being Witches working for the Devil and the consequences of that.

I include encouraging ways that many 'alehouse wives' women avoided that cruelty and preserved their craft.

I conclude this edition with upbeat examples of where the 'alehouse' women culture is thriving and growing in a much more balanced, inclusive, healthy, sustainable, and much more consensual way.
This is the second of seven 'Samhain' themed 'Nature Folklore' sessions.
Do you have a 'witching', alchemy, or brewing story or poems to share? Please volunteer to be a guest to include your story or poem of 'magic' . As a guest you can be live, or send me a pre-recorded video clip, or audio with photographs, or send me some photos and chat about them live with me on this Sunday. Please message me to let me know what you can offer, thank you.
Looking forward to you joining us on Witches Cauldrons & Ale, from Medieval to Now.
These Nature Folklore sessions on Sundays are only made possible through the kind subscriptions of our Patreon subscribers that help pay for my monthly production services and subscription costs
Subscribing also get my exclusive short videos and eventual course in return ...
I prefer subscriber revenue for costs rather than posting advertising, so please subscribe a euro, dollar, or pound, or more, per month and I will serve you some benefits in return.

Please subscribe to Nature Folklore through Patreon, as a Patron

If you are not comfortable subscribing through Patreon, please consider a donation into our Tip Jar via PayPal. PayPal account is not needed. Using any card will work. Thank you. 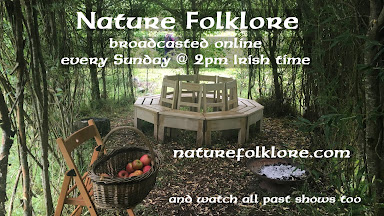 Yes, Nature Folklore now has it's own dedicated web site and is still broadcasting every Sunday, at 2pm Irish Time Watch every edition Live!   Now at NatureFolklore.com , every Sunday at 2pm Irish time Enjoy Nature Folklore sessions covering the 'Celtic Wheel Of The Year' and suggesting 'Applied Folklore', and that is about wholesome practical things we can do today with the mentoring of folklore. Through every year cycle we explore Ogham, Tree, Water & Sidhe folklore. Our annual themed series includes Barding, Yule Midwinter, Divination, Imbolc, Tree Keeping, Permaculture, Bealtaine, Midsummer, Sustainable Practices, Lughnasadh First Harvest, Harvest Season, Alehouse Women & Witches,  & Samhain. Meanwhile, Carrowcrory Cottage & Labyrinth Gardens is still targeted to open on Sundays, from 24th April 2022, but only for our Patreon subscribers , and other patrons. This is due to a very awkward insurance cover situation now, so apologies for the new l
Read more